“And it was not [possible] for this Qur’ān to have been produced by other than God….there is no doubt [it is] from the Lord of the worlds.”
Qur’ān 10:37

From the micro to the macro level, our knowledge of the physical world has grown astronomically in recent times. The nucleic acid double helix, more commonly known as DNA, the existence of sub-atomic particles or the discovery of the expansion of the universe are examples of discoveries which have caused paradigm shifts in our understanding of the universe. We have amended our theories by updating valid ones and by rejecting false ones. Published literature is a reflection of this reality. Every book represents the knowledge available to a writer at a certain time and place. As a result, books become obsolete after some time due to the information being found to be either false or incomplete, raising the need for them to be revised or re-written.

This is the case for the writings of every physicist, scientist or philosopher. No human being has ever written a comprehensive book with absolute perfection and certainty of knowledge. It is also the case that a writer usually has knowledge of a specific subject or a few related subjects. For example, one can write about history or economics or philosophy or physics etc. But it is not possible for a human being to write simultaneously on a great variety of different subjects with such in-depth and accurate information.

The Qur’ān, God’s final revelation, speaks about the origins of the universe, movements of celestial bodies, stages of human embryonic development, behavioural patterns of species, historical and archaeological truths etc. The Qur’ān contains over 6,000 Ayat [verses] with over 70,000 words and yet it is a fact that not a single verse contradicts any established scientific fact.

The miraculous nature of the Qur’ān lies in the knowledge it contains and this is an everlasting, repeatable and a living proof. It is filled with important facts which were revealed at a point in human history when no man could possibly have known them. A miracle is a divine act which defies and transcends universal laws and which God grants to the Prophets in order to convince people of the truth of their message.

These Divine miracles are designed to provide people with the capacity to perceive them as signs of God’s power, knowledge and will over all things in the universe. For a miracle to have full impact it should relate to an area of knowledge in which its intended audience are well versed; in this way can a miracle fulfil its purpose.

Multi-dimensional Miracles of the Qur’ān 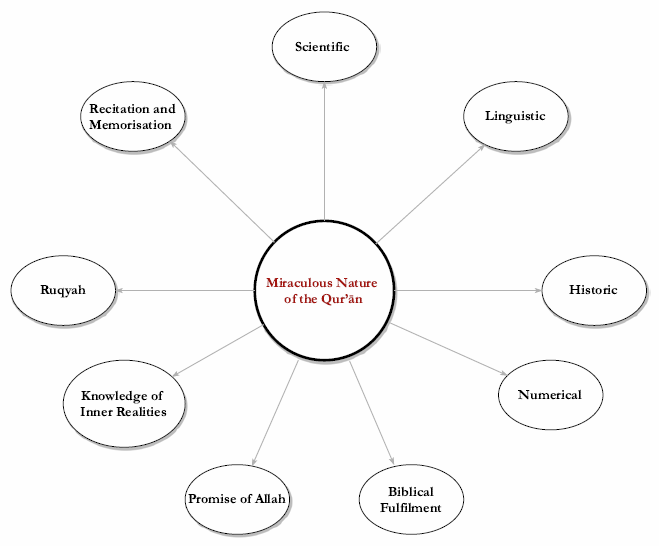 Linguistic – The genius of its language, elegance, rhythm, rich imagery, fluidity, its weaving of metaphors and concepts, its many varied and previously unheard styles and techniques of prose, as well a remarkable use of vocabulary, make it a work of eternal perfection. The Arabs of the time of its revelation recognised its non-human origin and accepted its Divinity.

Historic – The Qur’ān makes mention of ancient civilisations and historic events with precise accuracy. As an example, refer to the deliberate usage of the terms “Kings” and “Pharaohs” in the story of Joseph and Moses in the Qur’ān.

Numerical – The numerical harmony of the Qur’ān is undeniable and is just another proof that the Qur’ān is an endless, timeless miracle for every age. With over 70,000 words, the frequency and usage of words is extraordinary. Some examples:

Biblical fulfilment – There are a number of verses of the Old and New Testament that prophesised the coming of Prophet Muhammad, such as in Isaiah 42. There are many books written on this topic.

Promise of Allah – The future is an unknown entity for us. Only God knows the future. The Qur’ān predicts the future and makes promises which later become true. For example, it promises the Believers will become rulers on earth (Qur’an 24:55). Historically, the Muslims rose to become the global super-power of the world, firstly destroying the Persian empire followed by the Roman (Byzantine) empire. Another example is the prediction that within 9 years of the defeat of the Roman empire in approx. 615 C.E., they shall be victorious again. After Greater-Syria was lost to the Persians, Egypt was also annexed, and much of the Roman territory was lost. This lasted till around the year 622 C.E.. The Roman empire was on the verge of complete collapse, and then “came one of the most astonishing reversals in the annuls of war.” In 624 C.E., the Romans had their first victory and began a four year streak of victories culminating in the re-capture of much of their lost territory including Jerusalem.

Knowledge of Inner Realities – The Qur’ān addresses the human being with the knowledge of his inner-most realities. Upon hearing its words, the reader senses as if he is being addressed personally.

Recitation and Memorisation – It is now a fact that the most popular book of all time is the Qur’ān. No other book has been recited or memorised like the Qur’ān. Today, there are millions of people who throughout the world have memorised the whole Qur’ānic text.

Scientific – The world of science belongs to the category of the ‘created signs of God’ and His Divine Speech belongs to the ‘revealed signs of God’. It is not surprising therefore, that each time there is a breakthrough in unravelling the universe, we increase in certainty that the One who created the universe is the One who revealed the Qur’ān. Historically, every Prophet was given miracles and these were witnessed by their respective contemporaries.

The Prophet Muhammad is unique in the chain of Prophethood, for unlike all previous Prophets, he was sent as God’s final Prophet and Messenger for all mankind. Reason demands, therefore, that he should have a universal miracle that is not bound by time or geographical limitations. Every individual at every stage of human history, no matter where he lived in the world, is hence justified in saying, “If Muhammad is a Prophet for me today, I would like to behold a miracle today.”

Unlike the tangible miracles [an example being the splitting of the sea] of the previous Prophets, the main miracle of the Prophet Muhammad, although he was given other miracles, was an intellectual miracle. The effectiveness of the tangible miracles would have their greatest impact on eyewitnesses and their full impact would end with the death of these witnesses. If we ask a Jew or Christian to show us the miracles of the Prophet Moses or Jesus – they both would submit that it is not within human power to ¬¬demonstrate any of those miracles now. The Prophet Moses cannot be asked to split the sea again and the Prophet Jesus cannot be called to raise people from the dead. For us today, these miracles are nothing more than historical reports. But if a Muslim is asked about the greatest miracle of the Prophet Muhammad, he can readily show the Qur’ān – for the Qur’ān is a miracle which remains in our hands, and can therefore be examined by anybody today.

Non-believers will naturally seek an explanation as to the source of knowledge of the Qur’ān. Atheists would argue that the Qur’ān was the product of intellectual ramblings of the Prophet Muhammad, and the Jews and Christians would say that it was plagiarised from the Old and New Testaments. The fact is that such scientific statements do not belong to the period when the Qur’ān was revealed and no such statements exist in the Old and New Testaments. It is obvious that no one man could possess the diversity of knowledge that is contained in the Qur’ān. One could conceivably be lucky with a few guesses, but the variety, quantity and quality of accurate knowledge in the Qur’ān shows, without doubt, that these are not the words of a mere mortal.

Can the Qur’ān contain scientific errors?

It must be clearly understood that the Qur’ān is not a book of science, philosophy, geology or history – it is a revelation from God for the purpose of guiding Mankind. Nonetheless, if any expert from the various fields of knowledge analysed what the Qur’ān states, they would conclude that the Qur’ān, beyond doubt, is not authored by a man in the 7th century. If what the Qur’ān imparted was unfounded, science would, in time, prove its falsehood. Every scientific theory, from the historic past, that contradicted the Qur’ān has been proven to be false. On the contrary, every established scientific fact has consistently been in complete agreement with the Qur’ān – as true science is also Divine.

There exists a plethora of online literature written by people, many with vested interests, attempting to refute the facts that exist in the Qur’ān. Some of these writings are based on misconceptions, or are academically dishonest and in some cases contain blatant lies. It was for this reason that the corresponding Arabic text was also included for the verses of the Qur’ān quoted. Therefore, everyone is welcome to analyse and study the exact words spoken by God and assess and judge for themselves if the Qur’ān is indeed from Him [The Creator] or is authored by someone who lived over fourteen hundred years ago. There are now a number of authoritative Arabic dictionaries that have been translated into the English language, should you wish to research the words used in the Qur’ān.

The primary purpose of the Qur’ān is not to give us technical information about the world, because God has given us senses and intellect for us to gather technical information. The Qur’ān is a message from God addressed to the human and it reveals the meaning and purpose of our existence within the universe. The Qur’ān provides the keys to understanding reality. Without Divine revelation, human beings are like the blind men touching an elephant; we can sense some things but we cannot understand the reality of its existence.

The Qur’ān coheres with reality in such an amazing way that it shows that only the Creator of the Heavens and the Earth could have sent this book. Experiencing the Qur’ān’s truthfulness is like trying out a key. Without the right key, we cannot open a locked door. And, with the right key (i.e., with the message of the Qur’ān), we open the door (i.e., discover the truth of our existence) and thereby confirm that indeed the key is the right one.

We all have a monumental task of trying to understand who we really are as individuals and what the purpose of our existence is. The journey to ascertain the Truth can only be achieved by those who take their ‘lives’ seriously. God tells us in the Qur’ān that most people follow mere conjecture and assumptions and not facts. One of the regrets of the people of Hell will be that they did not adequately use their intellects, hence we ask you to look at the contents of this book critically but with an open mind. One should investigate the points being made with the fundamental intention of determining their accuracy and being prepared for the consequences they present. If what God describes of the world we can physically observe to be 100% true – then what He describes of what we cannot physically see, like the approaching judgement of every human on the Day of Resurrection, the punishments of Hell and the eternal bliss of Paradise, is just as true.

From this we see that the Qur’ān was not intended solely for one people or nation, but came for the benefit and guidance of all; a complete and comprehensive religion, providing knowledge for all the generations. If these teachings were limited to one century or generation, the objective of the Qur’ān would have long since expired. Yet the Qur’ān is constantly regenerating new meaning, providing a continual source of guidance.

You can order or download your free copy of the Qur’an Project at www.quranproject.org

One thought on “Have you read this Book yet?”